The correct use of capitalisation

1. The first word of a sentence

When you capitalise the first letter of a word you are using title case. You should always use title case for the first word in a sentence. A sentence is a string of words which follow a full stop and sometimes a colon.

The dog loved chasing his ball on the beach. His owner couldn’t throw the ball fast enough.

Things get complicated with colons! In British English, you should only use title case for the first word after a colon if that word is a proper noun. You should never use title case if the colon is introducing a list.

In American English, you should not use title case for the first word after a colon, if the colon is introducing a phrase which supplements the previous sentence. However, if the colon introduces a complete sentence, the first letter of that sentence should be capitalised.

There are many colours to consider: red, blue, green, yellow and orange.

There are many colours to consider: red, blue and green are all bold choices.

There are many colours to consider: colour is an important aspect of interior décor which you should never overlook.

There are many colours to consider: Colour is an important aspect of interior décor which you should never overlook.

Some style guides suggest that in American English, the first letter following a colon should only be capitalised if there are two related sentences after the colon.

There are many colours to consider: Red, blue and green are all bold choices. Colour is an important aspect of interior décor which you should never overlook.

The names of people, animals, countries, languages, cities, companies and religions are proper nouns. You should always use title case for these words, wherever they appear in a sentence.

Steve’s dog, Pluto, got lost when the pair were walking in London with Steve’s friend Jane.

Steve visited Hamleys when he was in London. The famous toy shop is located on Regent Street.

It’s easy to slip up when deciding how to tackle the words mum and dad. You should capitalise the first letter of these words if you are using them as proper nouns. In other words, if you could substitute the person’s name for those words.

When Mum went shopping, she forgot to buy a chicken.

You should not capitalise the words mum and dad when they are preceded by my or any possessive adjective.

My dad is playing football today.

You do not capitalise the first letter of the words mum or dad if the words are preceded by the words a or the.

That lady over there is probably a mum looking for her child.

Here’s where almost everyone will make mistakes! Animal breed names should be treated in the same way as other common nouns and proper nouns. Any word that features in a breed name that is a common noun and is either generic or refers to a group, should not be capitalised. Such words include terrier, hound, cat, pointer and retriever.

The golden retriever didn’t want to play with the springer spaniel.

Where an animal breed name features a proper noun, the first letter of that noun should be capitalised. With animal breed names, the proper nouns you will see most often are place names and nationalities such as Labrador, Dalmatian and French bulldog.

The German shepherd loved to play with the Tibetan mastiff

Unfortunately, entire breed names are often written in title case when they shouldn’t be. This practice has become so common that you would think it is grammatically correct to write German Shepherd, but it isn’t!

In each case, only the generic name should be written in title case.

6. The first word of a quote

When a quote is a complete sentence, the first word should be written in title case

When Steve arrived at the house he asked, ”What are we having for dinner tonight?”

When the words in quotation marks are only a partial quote or do not form an autonomous sentence, the first word should not be written in title case.

Steve said he was “really angry” about the cancellation.

Steve described the dog as being “quite large and muscular but very friendly.”

Days, months and specific holidays are proper nouns and so must be written in title case.

Steve’s anniversary is in December, shortly before Christmas. He generally celebrates on the nearest Saturday, rather than on the day itself.

The seasons of the year are not proper nouns and so the first letters of these words should not be capitalised.

I prefer walking in spring because it can be too hot in the summer months.

I really enjoyed reading A Tale of Two Cities.

Did you see the movie From Russia with Love?

You should treat specific periods of time, eras and historic events as proper nouns. Each word should be written in title case. However, centuries are not presented in title case.

The period between 4000BC and 2000BC is referred to as the Bronze Age.

I have fond memories of the Swinging Sixties.

The 20th century was an era of rapid technological advancement.

10. Closing a letter or email

When closing a written communication, you will generally use a valediction. You should use title case for the first word and lower case for all subsequent words.

The rules of capitalisation in English are so complex that even the most dedicated grammar pedant can slip up from time to time. Animal breed names appear to cause the most confusion, to the extent that the incorrect use of title case has become the norm. But with a little care and attention, you can write correctly. Just be prepared to defend your use of German shepherd and cocker spaniel!

One final point to note. Capitalisation is the correct spelling in British English. When writing in American English, use capitalization! 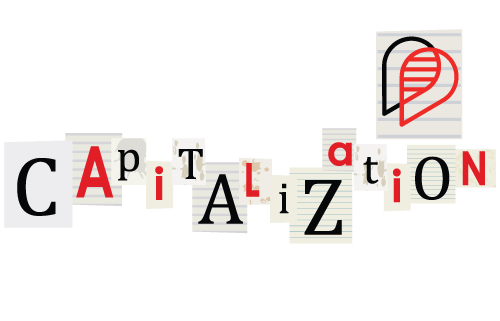